To say that more simply… right now to do good audio communication on the web, you have to use plugins built in Flash, QuickTime or Java. This Web Audio API aims to let you do much of that audio control via JavaScript and HTML5. From the specification intro:

Audio on the web has been fairly primitive up to this point and until very recently has had to be delivered through plugins such as Flash and QuickTime. The introduction of the audio element in HTML5 is very important, allowing for basic streaming audio playback. But, it is not powerful enough to handle more complex audio applications. For sophisticated web-based games or interactive applications, another solution is required. It is a goal of this specification to include the capabilities found in modern game audio engines as well as some of the mixing, processing, and filtering tasks that are found in modern desktop audio production applications.

The Web Audio API specification, which is a proposal for a standard being discussed in the W3C's Audio Working Group includes a set of example applications, including multi-player games like Quake, musical examples and more.

If you want to live on the edge with the "Beta Channel" of Google Chrome builds (I do), you can even go over to Google's page of Web Audio examples to try it out yourself.

It's great to see this support in Google Chrome as it can help us continue the move away from proprietary browser plugins to more standards-based solutions - and through that to a more open Internet. Kudos to the Google team for rolling out the support - I'm looking forward to seeing what people build with it!

Do Cisco's Cius and HP's WebOS tablets stand a chance against the iPad? 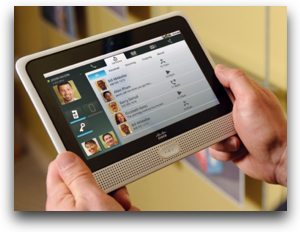 In light of the phenomenal success of the iPad, do "enterprise tablets" from Cisco and HP even remotely stand a chance? Particularly when: 1) Apple is targeting enterprises now; and 2) all signs are that Apple will soon be releasing a version 2 of the iPad with even more capabilities. Yesterday Greg Ferro took this question on in a post comparing the Cisco Cius versus HP WebOS tablets versus the iPad.

His post is definitely worth a read for his comparisons... I'll zoom in on what was for me the key point (my emphasis added at the end):

The problem with this lovely story is the Apple iPad. No doubt Cisco and HP have been working on their tablet stories for the last two or three years. I also have no doubt that the unexpected success of the iPad selling twenty or thirty million units in the first year has seriously upset their plans. But the thing really bothering them would be rise of the articles in the press about the iPad moving into the enterprise. Cisco and HP think that they own the enterprise, and it’s their right to make money out it. The idea that Apple can crossover a device from the consumer marketplace is going to kink them up. Users do NOT WANT to get a Cisco CIUS or HP Palm tablet, they want an Apple iPad.

And, I think, users will simply bring in their own iPads and want them to run on the corporate network. Particularly when the cost of some of the "enterprise tablets" is higher than that of the iPad.

It's just an ongoing part of the "consumerization of enterprise IT". I've long said "consumer experiences drive enterprise expectations" and that is true in the tablet space, too, I believe.

There is a part of me that worries about a monoculture and hopes that for competition/innovation the tablets from Cisco and HP can thrive. But I wouldn't count on it... I really like my iPad! ;-)

What do you think? Will the "enterprise tablets" succeed? Or perhaps succeed only in some niches? Or will corporate users want to use their iPad or some of the impending Android tablets?