Digium launches their "Inside the Asterisk" group weblog

Earlier this month, the folks at Digium rolled out their own group weblog, "Inside the Asterisk", which gives a view of activities inside Digium. A true group weblog, there are posts from a number of different people, including Digium CEO Danny Windham (ex. talking about his first days) and many others on staff.

Being a long-time fan of Tom Keating's great "VoIP and Gadget Blog", I had to smile when my day started off this morning scanning feeds and encountering Tom's post on Friday "Top 10 Reasons Why I love Asterisk".  Tom first takes us (by way of a link) back down memory lane a bit with a piece he wrote in November 2001 called "In Search of a Linux-based PBX" that outlines many of the folks involved then with "open source telephony" and makes for interesting reading (his picture also looks a wee bit younger! ;-).  His piece on Friday revisits that list a bit and talks about Asterisk and how it has risen to be clearly the leader of open source telephony solutions.

It also clearly shows Tom's passion, and that is to me one of the fun and wonderful things about this thing we call the blogosphere.... writers do show more of their passion and we very often do get to learn more about the people behind the names.... and that makes it a whole lot more interesting than just dry and blase "factual" articles.

So kudos to Tom for telling us why he loves Asterisk...

Recognizing the growth in open source telephony, Rich Tehrani and his team over at TMC.net today rolled out their "Open Source PBX community" at http://opensourcepbx.tmcnet.com/ . Sponsored by long-time open source supporter Sangoma, Rich says in his video that they aim for their site to be the place to go for news, commentary and documents about open source telephony.  Right now it seems primarily to have some white papers, a list of resources (which seem to mostly come from Sangoma) and open source-related news and articles.   Given that this just launched, it will be interesting to see what they do with it.

Rich asked for feedback about the site and my #1 point would be - could we please get some RSS feeds?  Unless I missed them, I can't see anyway to subscribe... and that's really how I personally like to read my updates these days.

Anyway, it's good to see TMC.net expanding their open source coverage and I'll be watching how it evolves.

In my queue of things to write about, I'd be meaning to comment on the fact that this year's Fall VON on October 29 - November 1 in Boston will also be the site of Digium / Asterisk World.   Jeff Pulver's team announced this back in March and it will have Mark Spencer and others from Digium involved.  I wasn't particularly surprised to hear this, given that Jeff Pulver has always had an interest in open source and that Digium has always had a large presence at VON exhibit halls.  (You would have to be blind to miss the giant orange booth with its many pods!)  Kudos to Digium and Pulvermedia for organizing a way to spotlight all the great stuff happening in open source telephony.  I'll look forward to seeing what goes on there.

New site promoting the integration of the Ruby language and telephony...

By way of a Twitter post today, I learned that Dave Troy has unveiled "Talking Ruby", a new site promoting information about the integration of the Ruby language with telephony, collaboration and messaging.  I've always been intrigued by Ruby (and also Ruby on Rails, which has been one of the most visible uses of Ruby), but have yet to really have had a reason to plunge in and play with it.  Perhaps this will provide an excuse.  Dave indicates on his site the following reasons for using Ruby with telephony:

I wish him all the best with the new site and do look forward to seeing what people come up with.  The site is a wiki, so if you're interested and Ruby-literate, you can easily jump in and participate (there's also a mailing list).

Asterisk running on a Roomba - "Press one to start sucking" 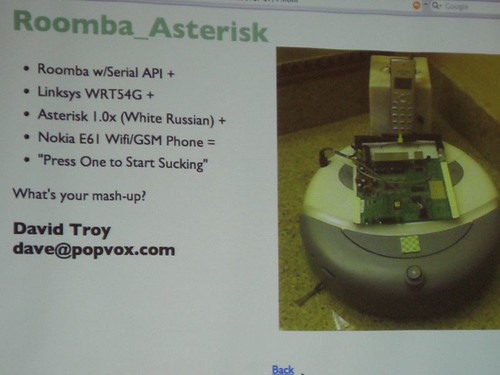 Here's something for a Friday afternoon... yes, indeed, out at Emerging Telephony 2007 back in February, someone (David Troy) did indeed have Asterisk running on a Roomba.  And yes, it was "Press one to start sucking. Press two to stop sucking."

More precisely, Asterisk is running on a hacked Linksys WRT54G access point (which is Linux-based) and the controller is using a Nokia WiFi/GSM phone to connect to the Asterisk install.  You could also control the direction of the Roomba using the other keys on the phone keypad.

As I mentioned in a recent post, the beautiful thing about VoIP is that it now enables people to "play" with telephony... and do wacky things like hook it up to a Roomba!  :-)

Enjoy the weekend!  Perhaps next week I'll actually get some time to upload the rest of the pictures I took out at ETel. (Hey, it was only 6 weeks ago... )

As I travel around giving presentations about the technologies that are disrupting telephony, one of the themes I discuss is that one of the most severe disruptions brought about by VoIP is that people now have the ability to "play" with telephony in ways that were never possible before.  Pre-VoIP, you needed special (and typically costly) equipment.  Yes, there have been any range of CTI cards that let you play to a degree, but buying the real equipment was just not possible for most folks who might want to "hack" in the original meaning of the word.  Enter VoIP.  Now all you need is an old PC and some open source software and... ta da... you're playing with telephony.

What I also see out there is that this ability to hack on telephony is happening at the same time that hacking on networks or operating systems seems to be getting less exciting and interesting.  Oh, don't get me wrong, there's still amazing things happening out there... but for people who want to "play" with technology, those areas aren't as exciting or novel as they once were.  So many of those early adopters have moved on to hack on other things... primarily, it seems to me, on "Web 2.0" apps/services/mashups... or telephony.  (And you'll note the already happening collision of both.)

Because I like giving presentations with very minimalist slides (unless forced to bulletize), I often summarize this latter point as:

Whether you agree or disagree with my point, I don't think anyone can deny the continued growth in the number and capability of open source telephony projects.  By way of voiploser's blog (also worth checking out), I learned of VoIP Now's list of 74 Open Source VoIP Apps and Resources.  It's a great list, which really serves to illustrate the amount of open source activity happening with regard to telephony.   Some of the projects on there have been around for quite a long time, while there were certainly some there that were quite new (and I'd not heard of them).

My only quibbles with the article would be these:

Quibbles aside, the list is definitely a good one, and kudos to VoIP Now for putting it together.

I admit to really only very peripherally followed the growth of FreeSWITCH, so I was intrigued to attend the "FreeSWITCH Boot Camp" session this morning here at ETel.  It was a tough call given that Stowe Boyd was also speaking, but I wanted to understand what FreeSwitch was all about.  It was an interesting talk, although I'm left with the following observations:

Overall, my impression was that it's an interesting toolkit to let folks play with telephony on potentially on a large scale.  It will be quite interesting to see what evolves out of the FreeSwitch developer community.  I'd be interested to know if anyone reading this is using FreeSwitch and what they are doing with.

Anyone out there using ChanSkype to connect Asterisk to Skype?

Anyone reading this blog using the ChanSkype software to connect Asterisk to Skype?  I've not played with it at all myself, but it sounds like an interesting idea.  Here's what they say it can do:

Their FAQ is just a wee bit sparse on details, like, oh, precisely how many simultaneous connections will it support?  Their main page has the text above and on the Buy page they note that corporate licenses are licensed per port up to 30 users and it has this text:

This limitation is not technical, for ChanSkype's simultaneous call capabilities are limited only by system resources.

If anyone has played with it, I'd be curious to know how it works.  It's intriguing enough to me that I might just have to revive my dormant Asterisk install.

In just a few minutes I'll be getting in today's rental car and heading up to Ottawa for the remainder of the work week for some meetings at the corporate office.

One of the nice things about being up there today is that I'll get to drop in on an OCLUG meeting tonight.  In the most of five years we lived in Ottawa, OCLUG was a wonderful place to meet some really incredible people.  I very much enjoyed the time spent there and the friendships that were formed... and I look forward to seeing many of those folks again tonight.   Not quite sure where the "Beer SIG" will be since the meeting is now out on Woodroffe, but I'm sure there's an appropriate spot somewhere around.

The meeting will be doubly interesting because tonight's topic will be Asterisk, which of course is of great interest to me.  Should be interesting to see what is being discussed. (Not quite sure what Randal will be doing with "Fractal Poetry", but hey, it sounds intriguing, anyway.)

If any of you reading are going, I'll see you at the meeting.

(As I now get in my white rental car to drive up to Ottawa with snow all around... whoever thought up creating white cars obviously missed the fact that in the winter those cars are almost invisible.  Ugh.)