Long-time readers will know that I have been intrigued for a long time with what we now call "cloud computing" (and have written about it and spoken about it) and also continue to find the world of open source telephony interesting.

So naturally when I'm pointed to a step-by-step tutorial about running Asterisk in Amazon's EC2 cloud, I'm interested. :-) It's a nicely done tutorial and I look forward to seeing what people will do with it. (Unlike Mark Headd, who pointed to the tutorial in a tweet, I won't be trying it out this weekend, but I will be doing so at some point soon.)

If you found this post interesting or useful, please consider either subscribing to the RSS feed or following me on Twitter or identi.ca.

I'll be speaking today in a "Hosted Speech Solutions" webinar...

In about 2.5 hours, at 11am US Pacific / 2pm US Eastern, I (Dan York) will be participating in a "Hosted Speech Solutions" webinar sponsored by Speech Tech Magazine. I'll be joining colleagues from Microsoft (TellMe), Angel.com and Convergys. We'll be talking about each of our hosted offerings and then answering a series of questions before then throwing it open to questions from the audience.

If you would like to join in and learn about our solutions (and those of our competitors), you can register for free.

Jon Arnold interviews me about voice and web services, cloud computing and more

Is the role of "voice" diminished or enhanced by the availability of web services? How does voice fit into the "cloud"? Where do service providers fit into the picture?

Out at ITEXPO last month in Los Angeles, industry analyst Jon Arnold asked me (Dan York) to participate in a series of video interviews he was recording for his IPConvergence.TV site. In the interview, which is now available for viewing, we talked about "voice-enabling" business processes, web services, "cloud computing", the challenges to service providers and customers and much, much more. Jon also asked me to talk a bit about what I see ahead of us in the next few years. It was a fun interview to do and I appreciated the opportunity.

NOTE: There is no way to currently embed the video, so you'll need to watch it over on TMC's site. I'll also note that on my Mac I couldn't watch the video in Firefox but instead had to use Safari. Now this may be due to some local configuration issue on my system, but I thought I'd mention it.

Heading out to Los Angeles this week for Communications Developer Conf / ITEXPO...

As I note over in my Voxeo blog post, I'll be out at the Communications Developer Conference (co-located with ITEXPO) this week in Los Angeles. I will be speaking twice. First on Wednesday morning I'll be talking about SIP Trunking and security as part of the Ingate SIP Trunking workshops from 10:15-11:15am. Next, on Thursday, I'll be speaking about "Developing Voice Applications in the Cloud", a favorite topic of mine these days.

Voxeo will also have a booth and I expect to be there. I'm also doing some video interviews and other media work (actually on both sides of the camera). I'm looking forward to catching up with a good number of folks out at the show.

If you read this blog and are out there at either the Communications Developer Conference or ITEXPO, please do come by and say hello. I posted the schedule of talks over on Voxeo's blog site. You should be able to find out more about where precisely I am through either twitter.com/danyork or twitter.com/voxeo.

Okay, so the iPhone got better - so what? To me, the new iPhone 3G was NOT the most interesting part of yesterday's Steve Jobs keynote at the Apple WWDC event. Sure, the blogosphere (and mainstream media) is buzzing like crazy about it (and we discussed it at length on yesterday's Squawk Box). Sure, it's great that the iPhone costs a lot less (at least, up front), is available in more countries (but still not in Vermont!), has GPS and now will work over 3G networks. Sure, all that is great.

<Donning flame-proof clothing> But at the end of the day, it's still just a mobile phone! Sure, it's an incredibly sexy one and yes now that I live in New Hampshire I admittedly am considering getting one. But it's... still... just... a... phone. (And yes, I realize such a statement is heretical in defiance of the Cult of Apple (of which I am increasingly becoming a member).)

To me what was far more intriguing was Apple's launch of "MobileMe" at me.com. Why?

Apple is getting into the "cloud" in a major way.

Let's take a look at what Apple is offering (watch the Guided Tour to see it in video):

No need to dock iPhone to computer. In fact, no real need to use an iPhone - it will work perfectly fine with regular Macs and PCs, although obviously the iPhone adds the Mobile component. All for the price of $99/year... or $8.25/month. (And with the cute domain of me.com replacing the .mac.com domain.)

IT'S ALL ABOUT THE SYNC

At a base level, MobileMe is all about synchronization, a.k.a. "sync". Now synchronization is not overly sexy. It's not overly exciting. You don't necessarily see people out there drooling over "sync" (the way they do over, say, the iPhone). However...

As we move more and more of our life into the "cloud", sync is critical.

So with MobileMe, you can now sync your email, contacts and calendar between your various devices - and also the cloud. 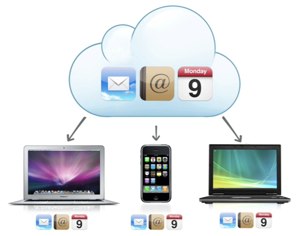 My information lives in the "cloud" and is accessible and visible - and modifiable - through the various devices. Consider the ways in which I can access and modify the data:

My last bullet point above is particularly of interest to me. From the demonstrations the web interface to the information looks like the typical AJAX-y kind of interface we see with GMail, YahooMail or any of the other online mail services we have available today. The key question is this:

Will it only work in certain browsers?

Or will it work in all browsers? Could I, for instance, access the information using Firefox on a Linux desktop? Could I even see it using the mobile browser on my Blackberry 8830? Conceivably I could... we'll have to see. Current "supported browser list" is Safari 3 or Firefox 2 for the Mac and Safari 3, Firefox 2, or Internet Explorer 7 for Windows.

In the end, if you buy into using Apple for sync - both literally in paying for the service but also in using your MobileMe account as your online identity - and if you trust Apple with your data and with being available, it looks to be a powerful way to live with your data up in the online cloud.

And so Apple joins the other giants in the playground... Microsoft gets the whole concept of sync with FeedSync and LiveMesh... Google has been all about applications in the cloud, but they've gotten into sync as well with Outlook Calendar sync and Blackberry sync plus IMAP email to use your email wherever (and mobile email apps)... Yahoo's had various forms of sync around... now Apple joins the battle, too.

IT'S ABOUT PICTURES, TOO

As part of MobileMe, Apple also rolled out MobileMe Gallery which lets you easily create and share online photo albums. Think Flickr only with synchronization with all your devices (and without the community that is at Flickr). MobileMe Gallery can also be viewed on AppleTV in addition to your other devices. This capability has been here in a limited form with DotMac, but now seems to be expanded.

IT'S ALSO ABOUT REALLY BIG FILES 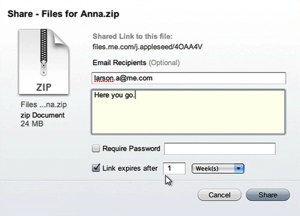 MobileMe also gives you a 20 GB online file storage area to "store your files in the cloud". Most interesting to me was the file sharing capability. I'm a podcaster and I work with very large audio files. Sending 20MB or 50MB files (or larger) to someone else such as another producer is a serious pain-in-the-neck.

To solve this large-file problem, a whole crop of newer companies have sprung up... Box.net, YouSendIt, Drop.io, my current favorite DropBox and half a zillion other ones.

Now Apple joins that realm as well... upload a file from any of the devices and simply click a Share button - and then share the link out or send email to people who can share. Set a password... restrict the number of downloads...

A key point here, too, is that to a Mac user your "disk in the cloud" appears simply as any other folder in your Finder. To a PC user it's simply another drive to map.

No web pages to go to. No other applications to install. Simple. Easy. (Provided you've bought the service.)

IT'S ABOUT THE PRICE

Strangely, a good chunk of the commentary I've seen thus far about MobileMe has been about the fact that Apple is charging $99/year for a service that others like Google provide for essentially free. Sure, others are offering the service for "free"... although if you think about services like Google's (which I use) are free as long as you are okay seeing advertisements.

Now I am personally already a .Mac user... so I'm already paying the $99/year. I do so in part because I want to try the services and also because I am personally willing to pay for service because I know it does cost money. Having said that I also like free services and use them a great amount as well. We'll see how Apple does... if they succeed in making the experience simple and painless they just may find people willing to pay that $99/year.

IT'S ABOUT THE CLOUD

In the end, the reality is that an ever-increasing number of us are moving more and more of our data, our applications and indeed our lives into the online "cloud". While some of us may already be sick of seeing marketing pieces about "cloud computing", the truth is we're only going to see more and more on the topic as we move more and more into the cloud.

Apple's MobileMe is their entry into this grand story we're all participating in writing. The service isn't available yet, so we can't really judge it yet... and yes, I have all sorts of questions about it myself, like:

And so on... we'll have to see. Still, it looks to be an interesting entrant in the space from Apple.

OK, YEAH, IT'S ABOUT THE PHONE

All joking aside, yes, I do realize that yesterday's WWDC event was all about the iPhone 3G.... and the potential that it has to turn millions more users into endpoints of the giant interconnected clouds we're building... we certainly do live in interesting times!

What do you think about MobileMe? How successful do you see it being? More walled garden or maybe something better?

P.S. Want to be notified when Apple actually releases MobileMe? You can now signup to receive email notification.

Here are some other views of the iPhone 3G and the WWDC keynote from other VoIP bloggers: