Why Is Skype Forcing A Software Upgrade On All Of Us? (Plus The Community Outrage)

Today when I opened up my laptop and switched to Skype, I found that I had been logged out: 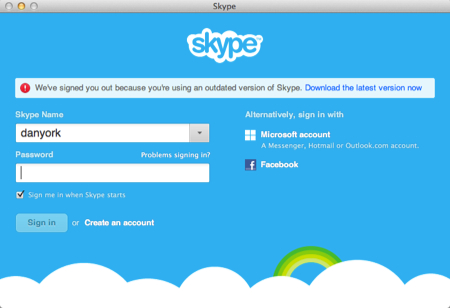 The text in that image says:

We've signed you out because you're using an outdated version of Skype. Download the latest version now.

Now, to be clear, I wasn't using an ancient version of Skype. My laptop had version 6.3.0.602 from sometime in, say, March 2013 - so yes, it was over a year old, but the thing with Skype is that it has had a history of always "just working", which perhaps we as users have gotten used to. The upgrade went fine on my MacBook Pro that is still running Mountain Lion (10.8) and I'm now using Skype version "6.15 (334)".

In a Skype public chat in which I participate a number of other users said they'd been logged out - and looking in the Windows Skype community and Mac Skype community web forums I see MANY messages from people who are experiencing problems over the past week. The frustration is even visible in the Linux Skype community (a community Skype has often ignored), where a staff moderator posted last Friday, August 1, this message:

From today, users with Skype for Linux version 4.2 and older will not be able to sign in to Skype. The error messages user will see during sign in may include “Can’t Connect to Skype” or ”Can’t login on Skype”. To continue using Skype, please update to the latest version.

The replies mostly indicate that the "new" version of Skype won't work on various configurations of Linux. The 99th response to the threadperhaps sums up the anger best:

In all your web content you people claim that forcing us to drop 4.2 and move to 4.3 improves our lives and makes our Skype experience better. If you have bothered to read all the responses in this topic, by now I hope you understand: YOU ARE NOT MAKING SKYPE BETTER FOR US. 4.3 breaks audio compatibility. Pulseaudio does not work with my USB external audio equipment, and running it causes my other audio-based apps to stop working. If you want to make Skype better for us, put ALSA support back in. Or release the source code so we can do it ourselves. Or stop blocking 4.2 so we can continue using the version that DOES make our lives easier. What you have done to Skype is an abomination.

You can see similar sentiment in the lengthy thread in the Mac community. Here's the 78th message in the thread:

Hello. Okay, straight to the point. THIS is not a solution. I've tried many times diferent ''approaches'' to this problem. From trying to use an old version 2.8 to just plainly updating in the skype app as asked (which I downloaded and when I tried to sign in it logs me out cuz its asks AGAIN for the update); I even tried unistall skype and download it again, but everything fails. And no, I won't update to Mavricks; I'm fine with the current version I have; thanks. So, plz, I do like skype, its awesome for work (which I use EVERYDAY) and keep in contact, but this is waaaaaaay out. PLEASE GIVE A SOLUTION. THANK YOU. :happy:

I'm ready to drop Skype. I do not allow even APPLE to tell me how to configure my computer, much less MICROSOFT (who owns skype since 2011). There is no way I'm upgrading to Mavericks. Absolutely no need, and I still use applications that require Rosetta, which is not available in anything past 10.6.8.

Bye bye skype. I'll use it on my iPhone, but no more on my desktop, and if it gets weird on my iPhone skype will simply lose a customer. Period.

There are MANY more examples... and many more in the Windows community as well. All in all it seems that this "forced upgrade" is not going down well with many people.

As far as I can see, Skype is pointing people to this support article about upgrading that says:

We want everyone to experience the best Skype has to offer – from enhanced quality to better reliability to improved security – and the newest version of Skype is the way to do that. So everyone can benefit from the latest improvements, from time to time we retire older versions of Skype across all platforms, including mobile devices. It’s easy to update Skype; once you do, you’ll have access to the latest features our team has worked hard to deliver.

When we retire older versions of Skype, if you are still on an older version, you would be signed out of Skype automatically and won’t be able to sign in again until you upgrade to a new version. Simply follow the steps below to download, install, and sign in to the latest version, and you’ll be back in Skype in no time.

Skype also provided a bit of a preview of this action in a July 16, 2014, blog post titled "Update Skype now to improve your experience" where they trumpted all the benefits of upgrading and included one little line about the impending retirement:

So everyone can benefit from the latest improvements, we’ll retire older versions of Skype across all platforms, including mobile devices, in the near future.

where it turns out that "in the near future" meant about two weeks later at the end of July 2014. :-(

The lingering question is... why now?

I mean, I do understand that one of the strengths of Skype historically has been that it "just worked" and that pretty much any version of Skype would still let you connect. This has allowed Skype to become the amazingly ubiquitous communication tool that it has become.

The down side of this for Microsoft/Skype is that they can't get people to use all their new services - or see their new ads - if there are so many older versions.

Similarly, they can't move to new technical architectures that may provide better service when they have to also support a long history of past releases. (For example, their move away from the peer-to-peer architecture that was their original highlight to more of a centralized "cloud" architecture to provide better support for mobile clients.)

I get all that.

I can understand why Microsoft would want - even need - everyone to use newer versions of Skype.

But why now? Why the end-of-July 2014 point? Was that just an arbitrary date? Is there something else driving it?

And what changes are being made in these newer versions? Is it, as one friend said, because Microsoft wants to move away from P2P chat? Or make some other technical changes?

What are they doing that caused them to decide NOW was the time to move?

The somewhat crazy thing with the timing is that it is not like Skype is the only choice for people now. There are a ton of competing communication channels. I've personally been using Apple's Facetime and Google+ Hangouts a good bit more these days for communication. As I wrote about recently, Facebook is clearly looking to make their Messenger be a mobile tool for voice and chat communication. And there are many other mobile apps that are trying to be "the next Skype". Plus... there is the whole world of WebRTC and the zillion new apps and sites that are providing new ways to communicate.

And maybe THAT is the driver. Perhaps Microsoft realizes that to compete with all these new services and to be able to evolve Skype they NEED to force users to come up to the latest versions. Perhaps they are hoping that any disruption in users behavior will be only temporary and that after that migration they can then move ahead faster.

Or perhaps this is just part of the general changes that Microsoft is making to re-focus their energy and staff. As shown by their recent large round of layoffs, the way they have been doing things hasn't been working - and they need to change. Perhaps they view the customer hostility (and potential switching) that will come from forcing these upgrades will be balanced out by their lower support costs by not having to support older models.

Or perhaps they just think of us all as sheep who won't be bothered to change.

I don't know. And Skype doesn't seem to be saying beyond their vague platitudes about how upgrading will benefit everyone.

Will Users Move To Alternatives?

The question is, of course, will users actually move to alternatives?

Judging by the outrage in many of those community forums it appears that Microsoft may have underestimated the technical problems that users would face with these upgrades. I see a lot of people saying they can't upgrade to Skype due to their operating system version or other issues.

Skype is effectively dead to them.

So in this case they will have to find an alternative because they simply can't use Skype.

But there is no easy way to know what percentage of people are affected by these upgrade issues. It could be quite small. It could be that the vast majority of users have automatically updated with no problem.

I took a look at Hudson Barton's Skype user statistics but unfortunately his system stopped collecting statistics on July 31st . He's restarted it now... but the data has been lost for this past week that might have shown us what, if any, impact there was. He is showing 77 million Skype users online right as I write this, which is consistent with recent numbers.

It's also not clear where Microsoft/Skype is in rolling out this forced upgrade to their users. From the user community posts it seems many people started experiencing this problem back on July 30th or 31st. I just received the notification this morning, August 6th. I know from others online that they are still using older versions and have not yet received the forced upgrade notice.

We've been here before, too. Back in December 2010 there was a Skype outage that disconnected almost everyone for several days. Many of us thought this might provide a push to people to try another service... and it didn't. Once the outage was over people generally went back to using Skype. It was easy - and the directory is there, i.e. so many people you know use Skype that it makes it super easy to connect with people that way.

Times are different in 2014, though. There are more and better choices than there were four years ago. Offerings from Apple, Google and Facebook all are quite compelling - and bring with them a directory of users. Perhaps not as many as on Skype, but still quite solid.

What will you do?

Switch to using more of another service such as iMessage, Google+ Hangouts or Facebook? Try out a startup such as Tox?[1] Use one of the many mobile apps?

Or will you just stick with Skype? (Assuming, of course, that you can upgrade.)