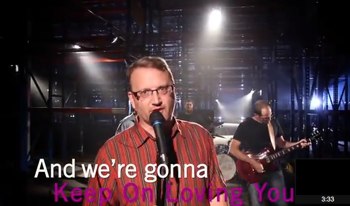 Oh... my. As anyone who knows me can attest, it's extremely hard to render me speechless... but I admit to sitting here this morning staring at the screen with a rather uncomprehending expression on my face and with my mouth hanging open...

Sometime after my friend Alec Saunders joined RIM last year as their VP of Developer Relations, I said to someone that while I admittedly did view his new mission as somewhat akin to tilting at windmills, he was perhaps just the kind of "rock star" that RIM needed. A very passionate and dynamic presenter... a very charismatic leader who could rally people... a creative guy with a theatre background... someone who thinks differently...

... never in my wildest ideas did I expect that we would be seeing Alec AS an actual "rock star" in a music video! But yes indeed, here he is with two other VPs from RIM in a remake of the famous REO Speedwagon song. (Alec is the main singer.)

My speechlessness soon gave way to laughter ... and appreciation for them for doing something rather different. If they were looking for a way to be "remarkable" and memorable, they found it.

Now, somewhat predictably, some of the tech press are calling this an act of sheer desperation and I'm seeing comments in social networks calling it "painful" and "cringeworthy."

But that's the point, really... the video is getting people talking about Blackberry!

Even me, who hasn't really written about RIM and Blackberry here since, oh, last year shortly after he joined RIM. :-)

The video is over the top... I did cringe a couple of times as they twisted lyrics to fit the tune. But it made me smile. And laugh. And I'll remember it!

Will it attract new developers to the BB10 platform? Will it keep existing developers staying loyal to the platform?

I don't know. They have a huge uphill battle to fight. But hey, at least this was something fun and different!

Kudos to Alec and all the folks at RIM for what was obviously a great amount of time, energy and talent into doing something definitely unique!

And here's the full video for those who want the experience:

Video: What Is WebRTC/RTCWeb All About? How Does WebRTC Work?

Do you want to understand what WebRTC / RTCWEB is all about and why so many people are passionate about its potential for extending real-time communications (voice, video, chat, data-sharing, etc.) into web browsers?

I recently wrote about some of the larger issues of how WebRTC will disrupt telecom, but in this video, "RTCWeb Explained", Cullen Jennings, one of the co-chairs of the IETF's RTCWEB working group, dives down into the technical details to explain how it all works and what the various different components of of the solution are. I particularly like how Cullen covered some areas like "identity" that I haven't seen stressed as much in other pieces about WebRTC. The video comes in at about 39 minutes and is well worth viewing:

For more information, I've put together a page about the broader WebRTC / RTCWEB initiative with links to relevant resources.

How WebRTC Will Fundamentally Disrupt Telecom (And Change The Internet)

If we step back to before 1993, publishing and finding content on the Internet was a somewhat obscure, geeky thing that a very few people cared about and very few knew how to do. It involved gopher servers, ftp sites, archie, veronica, WAIS, USENET newsgroups, etc., and this "World-Wide Web" service primarily demonstrated via the server at info.cern.ch. It was an amazing period of time for those of us who were there, but the number of users was quite small.

Then NCSA released Mosaic in 1993 ... and suddenly everything changed.

Anyone could create a web page that "regular" people could see on their computers. Anyone could download Mosaic and use it. Anyone could share their sites with the installation of server software.

The Web was truly born into public consciousness... the creation of Web-based content was democratized so that anyone could do it... the creativity of developers was unleashed... a zillion new business models were thought of... and the Internet fundamentally changed.

... and the "Web" is still predominantly a document-based system. You make HTTP queries to retrieve pages and send HTML and XML documents back and forth between web browsers and web servers.

Separately, we have a world of telecommunication apps that have moved to IP. These are not just voice, but they are also video, instant messaging, data-sharing. They have moved so far beyond what we traditionally think of as "telecommunications". The apps use wideband audio, HD video, white boarding, sharing and so many capabilities that cannot have even been remotely imagined by the creators of the PSTN and all the legacy telcos and carriers. They are "rich communications" applications that have severely disrupted the traditional telco world.

The problem is that creating those rich, real-time communications apps is somewhat of a black art.

It is the realm of "telephony developers" or "VoIP developers" who can understand the traditional world of telcos and can interpret the seven zillion RFCs of SIP (as all the traditional telcos have glommed all sorts of legacy PSTN baggage onto what started out as a simple idea).

Deploying those rich communication apps also involves the step of getting the application into the hands of users. They have to download an application binary - or install a Flash app or Java plugin into their browser. Or on a mobile device install an app onto their mobile smartphone.

The world of rich communication experiences is held back by development problems and deployment problems.

Suddenly, any web developer can code something as easy as this into their web page:

Boom... they have a button on their web page that someone can click and initiate a communications session ... in ANY web browser. [1 - this is not pure "WebRTC" code... see my footnote below.]

Using JavaScript, that pretty much every web developer knows... and using the web browsers that everyone is using.

And without any kind of Flash or Java plugins.

WebRTC is about baking rich, real-time communications into the fabric of the Web and the Internet so that millions of new business models can emerge and millions of new applications can be born.

It is about unleashing the creativity and talent of the zillions of web developers out there and turning the "Web" into more than just a document-based model but instead into a rich communications vehicle. It's about moving these apps from an obscure art into a commonplace occurrence.

We really have absolutely no idea what will happen...

... when we make it as simple for ANY developer to create a rich, real-time communications experience as it is to create a web page.

But we're about to find out... and done right it will fundamentally change the Internet again.

If we think the legacy telco crowd are upset now about how "VoIP" has screwed them over (from their point of view), they haven't seen anything yet. WebRTC/RTCWEB doesn't need any of their legacy models. It bypasses all of that in ways that only the Internet enables. It is NOT shackled to any legacy infrastructure - it can use new peer-to-peer models as well as more traditional models. And it goes so far beyond what we think of as "communication" today. [3]  The potential is there for so much more than just voice and/or video... it's about establishing a real-time, synchronous "communications" session between two (or more) endpoints - what media are used by that session is up to the apps: voice, video, chat, data-sharing, gaming...  we really don't know what all people will do with it!

I see it as the next stage of the evolution of the Internet, disrupting to an even greater degree the business models of today and changing yet again how we all communicate. The Internet will become even more critical to our lives in ways we can't even really imagine.

THAT is why RTCWEB (in the IETF) and WebRTC (in W3C) are so critically important ... and so important to get deployed.

[1] The code I'm showing is for a library, "Phono", that in fact will sit on top of the WebRTC/RTCWEB protocols. It is an example of the new apps and business models that will emerge in that it makes it simple for JavaScript developers to create these apps. Underneath, it will use the rich communications protocols of WebRTC/RTCWEB. Someone else will come up with other ways to do this in JavaScript... or python... or ruby... or whatever language. But because they will all use the WebRTC/RTCWEB protocols, they will interoperate... and work in any browser.

In full disclosure I should also note that Phono is a service of Voxeo, my previous employer.

[2] And BOOM... there go the heads exploding within the legacy telco crowd when they start to fully understand how badly the Internet has rendered them even MORE irrelevant!

[3] Note that a WebRTC app certainly can communicate with the traditional PSTN or other legacy systems. My point is that it is not required to do so. One usage of WebRTC will, I'm sure, be to "web-enable" many VoIP systems (ex. IP-PBXs) and services. But other uses will emerge that are not connected at all to the PSTN or any legacy systems.

Do you like building telephony apps with Adhearsion? Have you built a really cool app that is worth sharing? Or used Adhearsion in an unusual way? Are you planning to attend AdhearsionConf 2012 in Palo Alto on October 20-21? Or would you attend if you could speak?

If you answered yes to any of the above questions, why not consider applying to be a speaker? The call for speakers is at:

The only catch is ... the deadline is TOMORROW, Saturday, September 8th!

Ever since I first saw Jay Phillips present about Adhearsion back at one of the early ETel conferences in maybe 2006 or so I've been intrigued by how easy Adhearsion made it to develop telecom apps. It's just incredibly simple to make powerful apps.

If you are a Ruby developer (or want to be) and you are interested in building telephony apps, Adhearsion is definitely worth a look... and if you do use Adhearsion, why not consider signing up as a speaker?