Fascinating move by Google today... Google+ now allows you to add voice-only phone calls into a "Hangout", allowing you to create conference calls of both video and voice participants. Announced by Googler Jarkko Oikarinen, it is available inside of "Hangout with extras" and allows voice calls out to US and Canadian numbers for free.

When I launched a Hangout (with extras) and then chose the link to invite others, I was presented with an extremely simple screen to add a voice call: 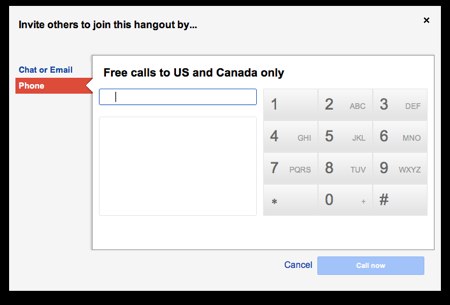 Once the participant had joined, they showed up in the hangout screen above the video participants (only me in this trial case): 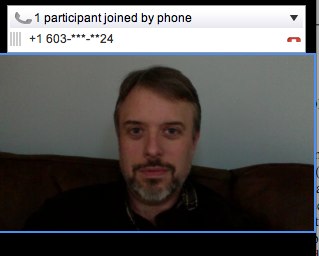 No word that I've seen yet on a maximum number of people that can be conferenced into a Google+ Hangout, but I'm sure someone will try that out shortly and we'll have an answer.

Calls are limited to the US and Canada, although TechCrunch is reporting that Google recommends Google Voice for low rates on international calls.

Now, mixing voice and video calls together is not something dramatically new. Skype has done this for quite some time now within their Group Video Calling service. Still, it's a cool step forward for Google+ and may provide an way to get more people using the Hangouts service.

At the very least, it may provide a way for some of the folks using Hangouts as a way of hosting regular video podcasts to include guests or callers who are not able to establish a video connection or use Hangouts directly. I'm thinking particularly of people who may be mobile or in places with low bandwidth. Or just simply a guest who doesn't want to use video or isn't a user of Google+.

I suspect some folks may certainly use this as a way to create free conference calls. As I proved in my own testing, only the originator of the Hangout needs to use the Hangouts feature of Google+. He or she can then simply call everyone else and bring them into the conference call.

I don't expect people to instantly stop using the zillion conference calling services out there. However, it certainly shows a sign of Google's direction and given the rate of change within Google+ I wouldn't be surprised to see enhancements to, for instance, at least store phone numbers coming at some point soon.

It would be very cool if there was a way to start a Hangout with a Circle... and have Google+ automagically connect out everyone in the circle via either video or phone... but who knows, that may come, too!

P.S. And if you are on Google+, why not add me to a circle if you haven't already done so?