Do 40% of men really make phone calls while naked? (Skype blogs are exploring the "Twelve Days of Skype Christmas"

Over on the Skype blogs, Skype blogger Peter Parkes is having a bit of fun with a series of articles under the banner of the "Twelve Days of Skype Christmas". They are a bit amusing... although I'm not really sure I wanted to know that 40% make phone calls while naked according to one survey!

Anyway, kudos to Peter for putting together a series of posts for the season.

Over at the Skype Journal, Phill Wolff had some fun yesterday with his "37 Sketchy 2008 Skype Predictions". Not all of them relate to Skype... and obviously not all are even serious, but they do make a fun read.

News out of Digium yesterday morning that there have now been over one million downloads of Asterisk in 2007:

Digium®, Inc., the Asterisk® Company, today announced the one millionth download of Asterisk in 2007, capping off a record year for the leading open source telephony company. Digium, which will complete its 24th consecutive quarter of growth and profitability this year, created headlines with new executive appointments, industry awards, strategic partnerships and acquisitions aimed at further advancing the company's presence in the small-to-medium-sized (SMB) VoIP market.

All that aside, it is a significant milestone for any project. Congrats to the Digium team!

P.S. I'm still waiting for an answer from Digium PR about how many downloads there are total for Asterisk. This is one million in 2007, but how does that compare to the overall total?

So the real question is - who is NOT suing Vonage? (Nortel sues Vonage)

Over at ZDNet, Russell Shaw reports that Nortel is suing Vonage over patent infringement. The real question these days seems to be - who is not suing Vonage? Seems like there is blood in the water and the patent lawyers are circling...

Last Thursday, Luca Filigheddu posted the announcement that his company's Firefox VoIP extension now works with any SIP-based VoIP service. From his announcement:

A new version of the VoIP Extension is now available for download and it’s not limited to the Abbeyphone VoIP service only. You can insert your favorite VoIP service or even your company’s Asterisk PBX. The following VoIP providers are already included: Free World Dialup, Gizmo Project, VoIPStunt, VoIPCheap and Abbeyphone of course. More to come very soon.


I've not yet tried this out myself, but since it does work on the Mac as well as Windows and Linux I'm going to have to do so soon.

Cool to see... and if you want to try it out yourself, go to http://www.mozillavoip.com/

SIP phone soon to be available on iPhone and iPod Touch? 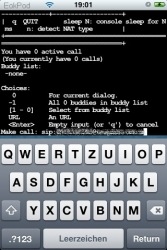 iPhone hacker eok writes to let me know that he and Samuel have gotten SIP registration and signalization working. They took a few mobile terminal shots, but the real work is being done via ssh. Samuel is working on connecting the audio in/out to the pjSIP. If you have iPhone or iPod touch coding skills and want to get involved in the project, connect to #touchmods on irc.undernet.org. It looks like most of the work will be done on European time.

As you can see in the screenshots, this is still very early in the development. Still, it's great to see this kind of development taking place.

By way of a ZDNet blog, I learned of "Tryphone" a site that lets you "try out" various new mobile phones online. It currently just has the Apple iPhone, LG Muziq, Blackberry Pearl and Samsung Juke... but of course lets you buy the phone immediately after trying it if you wish. I don't know that something like this can ever replace the experience of actually holding the phone in your hand, but it's an interesting idea nonetheless.

Skype Journal: A paradigm shift... (aka, "phones? who needs them?")

Skype Journal had this post today that was short enough to be captured in a graphic:

Indeed. How many other startups have ditched landlines, IP PBXs, etc.? Tools like Skype make that rather trivial to do, especially when voice no longer matters as much in everyday business communication.

Interesting times we live in...

When I think of "disruptive" actions in our industry, I personally don't ever tend to think of Verizon (well, I do think of them in terms of disrupting GSM service in Vermont, but that's a different post I need to write). But yesterday, Verizon issued a news release that I think bears reading: "Verizon Business Adds New Option to Simplify Move to IP". Essentially it amounts to the fact that Verizon will be offering "large-business" and government customers the option of having their IP-PBX hosted in Verizon's cloud. From a technical point of view, it's basically a hosted offering of Nortel's recent products:

The Nortel-based offerings, leveraging the Nortel Communication Server 1000 IP-PBX, Business Communications Manager and CallPilot platforms, enable advanced voice applications such as "find me, follow me," and integrated communications that allow for multimedia collaboration. They also help companies move to a unified communications platform to simplify and integrate a variety of business communications functions such as voice mail, e-mail and instant messaging. For example, end-users can see who is online, or they can prompt the system to prioritize incoming messages and send alerts to end-user devices. Verizon Business' support for the offering includes full implementation, as well as management of fault, configuration, accounting, performance and security functions.

The release also indicates that Verizon Business has set up close to 5,000 Nortel IP telephony platforms, which is certainly not a number to sneeze at. Now on one level, this isn't a terribly big deal. Verizon already provides all sorts of hosted/managed services to those large and government businesses, but this does mark Verizon's endorsement of hosted VoIP and their expansion into the support of the technology. Interesting move... and a nice win for Nortel as well.

RIP, Marc Orchant... you will be missed in the world...

The world is a bit darker tonight. Oliver Starr relayed the tragic news that Marc Orchant passed away earlier today. I've sat here tonight saddened... with my thoughts very definitely going out to his family... especially at this time of year.

And then, as a writer, I feel compelled to write. It seems really the only way to honor Marc's passing.

By most measures, I did not know Marc well. We never met face-to-face. I did not work directly with him. He had not ever interviewed me, nor I him. We had not participated in any joint projects. But in this crazy world of interconnected social media, it sure felt like I knew him. I'd been reading his ZDNet "Office Evolution" blog all along up until August when he left to join Oliver Starr in starting up us.blognation.com. There on blognation I enjoyed his writing and followed along as wrote about the latest Apple happenings, talked about how he liked his Kindle reader and ultimately how he removed himself from Facebook. Since he occasionally wrote about Skype, something I cover here as well, I did pay attention especially to those posts.

Marc and I did "meet" virtually through Robert Sanzalone's "Pacific IT" Skype groupchat, where Marc participated for a few months this fall. He pointed me to what he considered the best mobile VoIP handset around. We chatted about the new MacBookPro's. He sent me a Jaiku invite when I was looking for one... the kind of ordinary things that happens in such group chat rooms. He was helpful, kind, courteous... a consummate professional.

Perhaps why his death strikes me so hard is because he was one of us... a "tech blogger"... a writer... a storyteller.

He used words to help try to make sense out of the insanity that surrounds us on any given day. He tried to educate... enlighten... de-mystify. He wrote well and with an enjoyable style. He told stories.

And now he is gone.

What remains is his family (donations are being collected by Oliver Starr) and, of course, in this era of Google and seemingly infinite disk farms... his words:

And undoubtedly many more places than those I've listed here. Technorati also pulled up this video of Marc in 2005 explaining what a blog is:


There are perhaps more of those out there as well... and undoubtedly pictures in Flickr and other such sites.

Now, for the rest of us, all we can really do (outside of donating to Marc's family) is to remember him. Consider this my entry in building that collective memory... in helping in some small way to tell Marc's story. I've seen posts already from Alec Saunders, Aaron Brazell, Tris Hussey (on blognation),Robert Scoble... and I'm sure we'll see many more in the hours and days ahead.

No mere words can ever replace a loved one, but perhaps in some small way they can offer some degree of solace to Marc's family to know that he was valued by others... that what he did mattered... and that the world is a better place for him having been here.

Rest in peace, Marc... thank you for all you shared.