FYI, for those of you attending the Internet Telephony Conference & Expo in Los Angeles on September 10-12, I'll be participating in a panel session that is part of Ingate's SIP Trunking Seminar Series.  I expect it will surprise no one to learn that I'll be on the panel about "Enterprise Security and VoIP" wearing my VOIP Security Alliance hat.  My particular session is Tuesday, September 11, 2007, from 9:30-11:00 am.  (And yes, I guess it is appropriate in a way to be talking about security on 9/11!)   More details and the schedule are available online.

The sessions are free and open to anyone to attend.  Simply fill out the pre-registration form.

Just out on WebWire today, research firm iLocus indicated that 2.23 million IP-only PBX lines were sold in the second quarter of 2007, apparently generating revenues of over $208 million.  Cisco was the market leader and then, according to the news release, Mitel (my employer) was the leader of the non-Cisco shipments.  Mitel apparently had 42% market share (of non-Cisco shipments, I presume), followed by 3Com, ShoreTel and Inter-Tel (now part of Mitel).

Now the point of this news release is obviously to entice people to buy iLocus' research report, but I do find the data rather curious.  Mostly due to the fact that there is no mention of Avaya and Nortel, two of the other major competitors in the IP-PBX space.  Now perhaps this is due to this statement:

"iLocus has discontinued coverage of shipments related to legacy PBX upgrades or the hybrid systems. We focus on only the pure IP PBX shipments in the enterprise VoIP equipment quarterly tracking service."

I don't know.  I do just find it curious.  (Not that I'm complaining, mind you.)  In any event, this research is now out there and available to purchase.

It would be interesting to know how this 2.23 million licenses relates to the overall number of "lines" sold in the last quarter.  How many total IP and TDM lines were sold, and therefore what percentage of overall lines does this 2.23 million represent.  And is 2.23 million an increase or decrease over last quarter?  I want to see trends, charts... and I suppose in order to that I'd probably need to buy the report, eh?

As I've written about previously (here and here), with all the excitement about Facebook's application platform there haven't been a whole lot of apps focusing on VoIP.  Back on August 15th, though, another VoIP/telephony app did emerge, although at the time I was too caught up with VoiceCon travel preparations to blog about it.

The application is "Reb Me" (actual FB application here) from the folks over at RebTel.  Essentially it allows RebTel users to very quickly call each other at cheap rates.  (With RebTel, you get a local phone number to call international friends.  You therefore only pay the costs for your local call, and some small rate to RebTel (or free).) Given that I'm rather "late" to the game on this app, I'll point to other coverage for more details:

According to the Facebook stats (in the new way they are counting) there are 84 daily active users of the app, as of today.  The RebTel folks have also launched a Facebook group for RebMe users, although there doesn't seem to have been much activity in the group after its initial launch.

I'm also not entirely sure I'd call it a "VoIP application", because it's really all about making cheap calls from your mobile phones.  No doubt there is VoIP involved someone in the infrastructure, but when I think of a "VoIP app", I'm really thinking of something that does use VoIP protocols (like SIP)  and that involves IP endpoints in some fashion.  In any event, it's cool to see another telephony app inside of Facebook.  Kudos to the RebTel team for launching the app.

FYI, over on his blog, Pat Phelan put together a list of Facebook voice apps.  Nice to see... and I was not aware of the GrandCentral app (although, since you have to copy/paste the web call button embed code from your Grand Central page, the "app" really doesn't seem to be anything more than a box on your profile that can contain HTML code... and a way for the app developers to put some Google Ads in front of you on your Facebook app page).

Since voipstutter thinks I should rename this blog "Skype Telephony", I may as well feed into that image by noting that, per the Skype blog, Skype is now 4 years old.  I was not a user then, but judging by the screenshots of the client in 2003, it certainly has come a long way.  Whatever your opinions of Skype, it certainly has caused disruptions in the world of telcom... and it definitely does keep things interesting.  Congrats to the folks at Skype for hitting that birthday.

Given that we already have Jajah, do we really need nonoh?

Given that there was a service called Jajah, I suppose it was inevitable that someone would come up with a competitor called nonoh whose main point seems to be "We are cheaper than Jajah"! Indeed, if Jajah could run a table like this on their website: 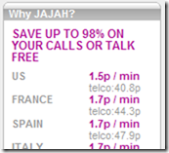 You can pretty much expect that a site like nonoh is going to run the inevitable comparison to Jajah: 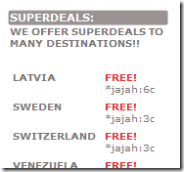 The race to the bottom and the commoditization of all phone calls (at $0) continues... who will get to the bottom first?  (And what, exactly, will their business plan be?)

Tom Keating has more info about the difference between Nonoh and Jajah. 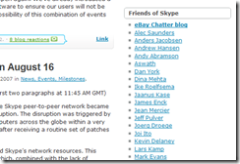 I noticed late last night that this weblog was added to the "Friends of Skype" blog roll that appears on the side of Skype's blogs.  Thanks, Skype, for adding me... I certainly don't mind the potential for others to find me. I do write about Skype, although often some of that writing can be critical.

I'll note, too, that Skype's list is actually a great compilation of the various bloggers out there who write about VoIP and collaboration.  Many of them would think of themselves as  (and accept the label of) "VoIP bloggers", but others are from the larger blogging space (ex. Neville Hobson, Robert Scoble, Ross Mayfield).

At VoiceCon this week, one of the smaller booths that looked quite interested was that of OnState, a company launching a Live Chat capability for their call center solution based on Skype.  With my schedule at the show, I was unable to spend much time going through a demo, but what I did see looked quite interesting and I thought I might blog about it at some point.

However, it turns out that Jim Courtney over at Skype Journal has written a rather comprehensive post about OnState, with all sorts of links to prior articles, resources, etc.  Now, Jim wrote his story primarily to address issues he found in two other stories about OnState, but the result is a nice profile of what the offering is all about.

I would have to wonder, though, what kind of reaction OnState was getting at VoiceCon given how recently the massive Skype outage was.  Anyway, I would recommend checking out Jim's article and the various links off of it.

Wow!  From the stage here at VoiceCon, Michael Rhodin, General Manager of Lotus Software at IBM just announced that they are acquiring WebDialogs, the makers of Unyte!

For those of us following the Skype space, Unyte has been known for a long-time as one of the leading business/collaboration extras available for Skype.

Congrats to the WebDialogics folks and it will be VERY interesting to see where this goes!

In answer to the many questions raised after their announcement yesterday, Skype today issued a clarification FAQ: "The Microsoft connection clarified".  For starters, they clearly stated that there was no connection to Microsoft:

1. Are we blaming Microsoft for what happened?

We don’t blame anyone but ourselves. The Microsoft Update patches were merely a catalyst — a trigger — for a series of events that led to the disruption of Skype, not the root cause of it. And Microsoft has been very helpful and supportive throughout.

The high number of post-update reboots affected Skype’s network resources. This caused a flood of log-in requests, which, combined with the lack of peer-to-peer network resources at the time, prompted a chain reaction that had a critical impact.

(more in the FAQ)

In response to the question that many of us raised (for instance, in my post yesterday) about "why this month's update?", Skype wrote:

2. What was different about this set of Microsoft update patches?

In short – there was nothing different about this set of Microsoft patches. During a joint call soon after problems were detected, Skype and Microsoft engineers went through the list of patches that had been pushed out. We ruled each one out as a possible cause for Skype’s problems. We also walked through the standard Windows Update process to understand it better and to ensure that nothing in the process had changed from the past (and nothing had). The Microsoft team was fantastic to work with, and after going through the potential causes, it appeared clearer than ever to us that our software’s P2P network management algorithm was not tuned to take into account a combination of high load and supernode rebooting.

The FAQ continues with answers to more questions.  All in all, a decent set of responses.

Jim Courtney over at Skype Journal also offers his perspective on this statement.  I join Jim in thanking Skype PR for recognizing that their initial responses were insufficient.  I think a common thread in many responses to the initial communication was that we were looking for more transparency. Stuart Henshall, a very early Skype user and one of the founders of the Skype Journal, posted a good piece about communication and Skype:  "Outing Skype Communications".  Well worth a read.

With that, we can probably wrap up the outage coverage...  it looks like Skype users are already back to using it.

P.S. Phil Wolff just put up a post "Skype and Crisis Communications 2.0" that looks like a good read...

Mashable.com often comes out with various lists, and today they offered "Skype Toolbox: 50+ Enhancements for Skype" which offers a nice list of the various add-ons that have been developed for Skype. Some good ones in here that I know of... a number that I'd not yet heard about.  The Skype ecosystem continues to grow...

(Hat tip to Julian Bond for pointing out the list today.)